There aren’t many slots that can be found all round the world in land based casinos, online casinos, mobile casinos and even social casinos, but Cleopatra from IGT is one of them. It encapsulates all the things a great slot game should have such as simplicity, colourful graphics, catchy sounds and decent wins. There are so many games that have been modelled on Cleopatra or the bonus feature and the Egyptian theme. IGT also brought out their own imitation with Cleopatra Megajackpots, offering a progressive jackpot as part of the game. 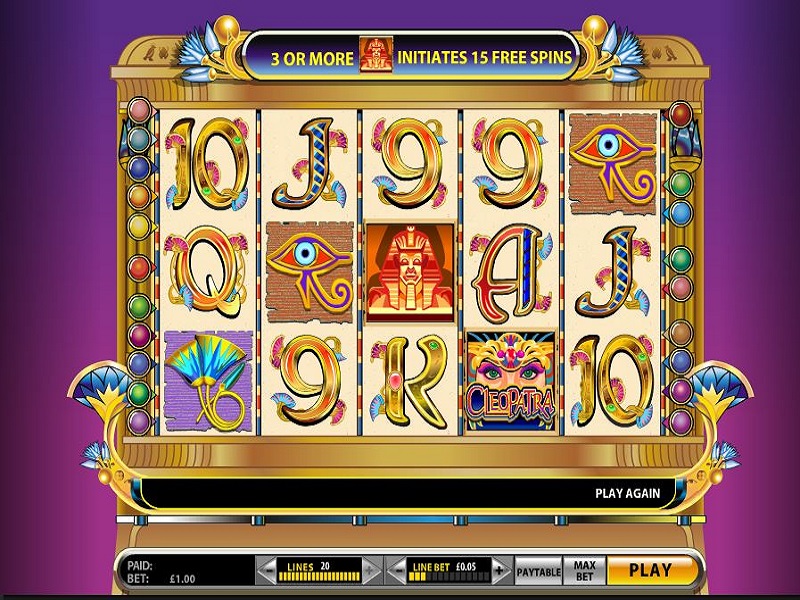 So what is it about Cleopatra slot that makes it so popular? Is it the mythical Egyptian theme that has been subsequently used in countless other slots? Is it the enticing color scheme of purples, reds, golds and yellows? Or is it the sultry voice-over complimenting you on all array of achievements? Probably a mixture of all 3 in all honesty, along with a rewarding bonus feature if triggered. There are just so many games that are either clones of Cleopatra slot or are very similar in some way, that it’s a glowing endorsement of what IGT created. Although long term slots players may argue that IGT took the idea for Cleopatra from Aristocrat and their Queen of The Nile slot machine – lets not go there right now. Play Cleopatra slot for free in this game window. 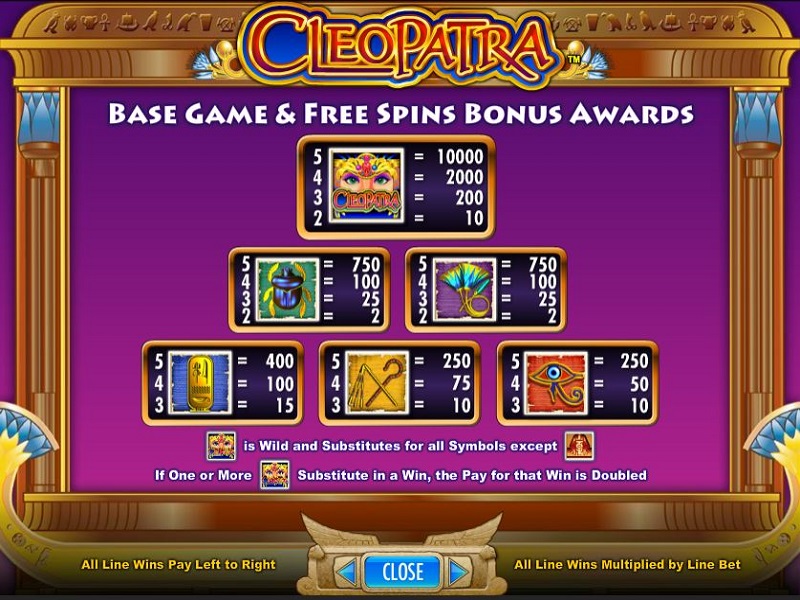 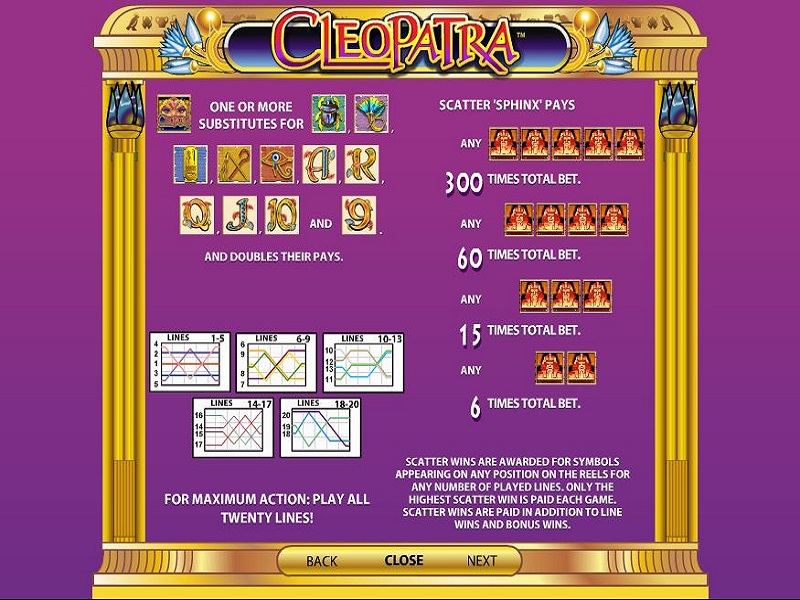 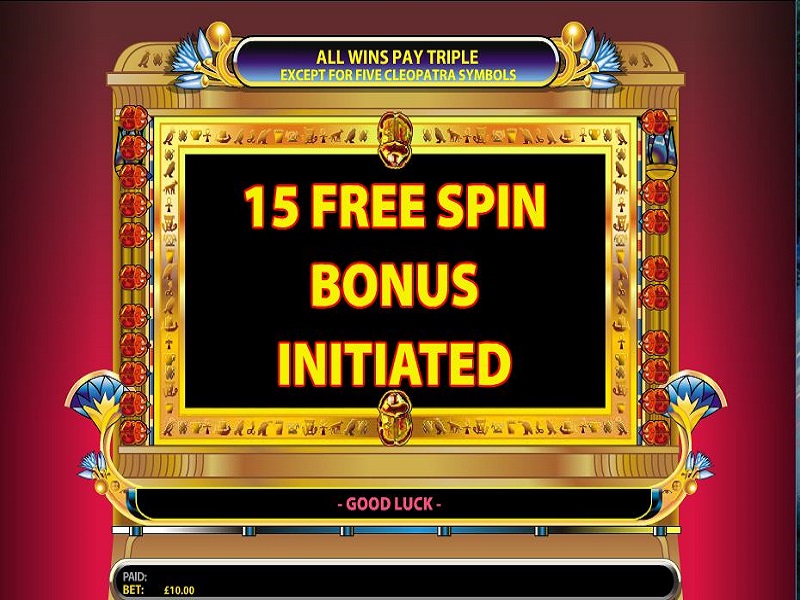 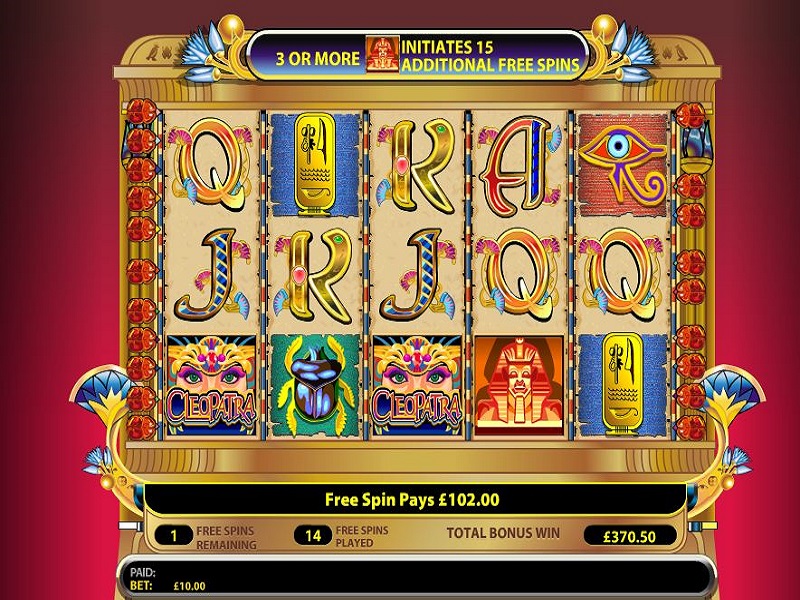 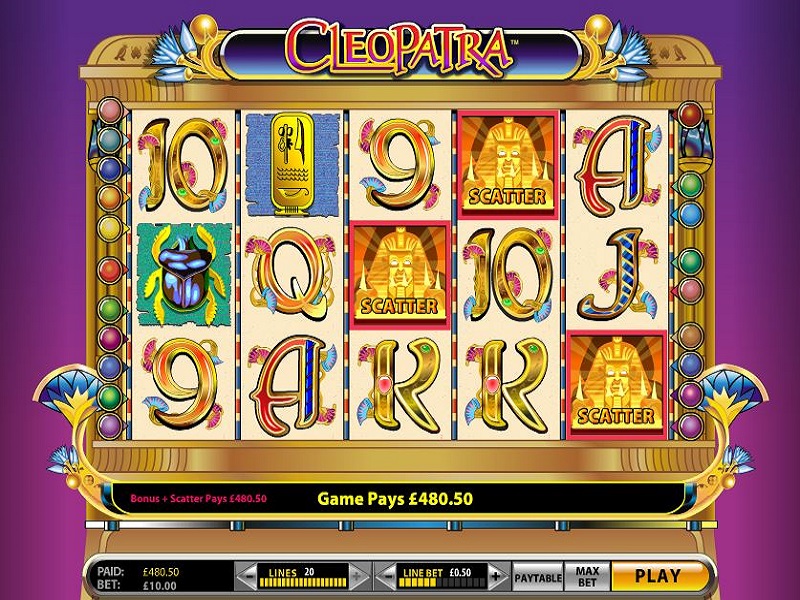 Few would argue that Cleopatra from IGT is possibly one of the most recognizable slot machines of all time. In terms of land-based slots it is found all over the world in casinos, pokies rooms and slots parlors. As an online game, Cleopatra slot has had several reincarnations (forgive the pun), settling with the colorful and slightly mesmerizing version that you will find available through this page.

The Cleopatra slot is probably one of the most famous video slots of all time. Based on the mystic world of ancient Egypt, where Pharaoh’s amassed vast wealth’s in money, gold and gem stones. They built incredible structures, like the Pyramids and The Sphinx that leave people breathless even today.

Cleopatra slot has been a popular slot in the high-limit rooms on the Vegas Strip. According to reports all the major casinos in the area, such as The Venetian, The Bellagio, Caesar’s Palace and The Wynn all offer a high stakes version of Cleopatra where customers can gamble $100 or more a spin on this infamous slot. What is amazing to consider is that these wagers are all made at a lower RTP than Cleopatra online slot RTP. I suppose its a case of if you don’t know then it probably doesn’t bother you or more likely that you cannot play Cleopatra online in almost all the States in the US.

Well if we ever needed and example of a theme-breaking game it’s IGT’s Cleopatra. This is a widespread land-based casino slot on both sides of the Atlantic and one of the first IGT transformed to the online format where it’s simple yet exciting math model made it very popular.

The mysteries of the Nile and Ancient Egypt are the single biggest subject for slots, there are over 100 with this theme from numerous developers and indeed IGT had another classic with Crown Of Egypt and the later but now discontinued Cleopatra II with it’s famous increasing multiplier during the bonus.

Yes, if you’ve ever played this you’ll know what this sound means, if you haven’t it’s the distinctive and unforgettable sound the 3 Copper Sphinx scatters necessary for the free games trigger make when dropping in on this fast-spinning slot. Cleopatra herself is a doubling Wild on all 5 reels and the biggest pay at 10,000 coins – you pay 20 coins to play the full 20 lines so that’s 500x bet! When she’s involved in wins you may get a seductive ‘twice as nice’ or ‘enchanting!’ and even ‘very pleasurable’ out of her!

Now after you’ve heard the ‘dang-dang-dang!’ and triggered the Cleopatra slot 15 free games, you may be happy to hear all pays are tripled (bar the 5 Wilds) and that you can retrigger them up to a maximum of 180 spins and you also get a reasonable 95.03% RTP on the game. Interestingly, I found out on this Cleopatra slot review that the online version pays slightly higher than the land-based version due to a pay if 9’s land on reel 1 and 2 at the same time. Given that 5-reel wins pay quite well, especially with the doubling Wild a top scarab or tassel win will net you around 250x your bet here, although it’s very rare to exceed a total of 300x bet in this free games bonus, but it can go on streaks of frequent triggers when it’s in the mood.

Worth A Nile Cruise?

Cleopatra slot is still around today because it’s a popular classic, although looking a bit tired now with today’s fancy graphics and animations available. The original online version was fast-spinning and had a pink or purple background (as pictured here) but you’re more like to see the the more recent version with the blue intro screen, slower reels and allegedly less volatility where the free games don’t start automatically. IGT have made us the Cleopatra Plus slot in 2016 with it’s 40 lines, stacked Wilds and unlocking levels set-up and it’s a great game bar the really poor bonus round which promises the Earth and rarely delivers over 30x stake despite enhancements of 1 free spin at up to 300x multiplier and other enhancements. For that reason, I am never going to be unfaithful to the older, wiser and original Cleopatra slot from IGT!

If you are more of a viewer than a reader then you might want to feast your eyes on this Cleopatra video review. You will find lots of interesting facts and information about this incredibly popular slot game. The game in the video is the most current version of Cleopatra and many readers will have seen and played the previous versions. Heck some of you may wish they would bring them back! All I know is that Cleopatra slot has been a title that could be classed as the jewel in the crown for developer IGT.  I would love to know how many millions of dollars this slot has raked in over the years, having been taken cash bets now since the 90’s! In all those years, the graphics, sounds and colors have all got progressively better, but the theme, style and format have all remained exactly the same.